The talent portion of the Miss America pageant over the last two decades has produced predominately singers, dancers and musical instrument performances. Have you been impressed? Were you wowed? Did you feel like you knew or “felt in a powerful way,” who the young and beautiful women were who were paraded out in front of you?

Many of the finalists competing in the Miss America pageant on September 13, 2015 in Atlantic City followed the advice that coaches have been giving beauty queens for decades. For two minutes, be sincere, believe in yourself and don’t be controversial. The talent competition represents the area that contributes the most out of the five categories that contestants are judged. 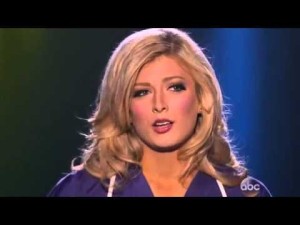 This year, a nurse from Colorado did not follow this advice. With a simplicity that left many critics unsure how to evaluate a talent that they had not seen before, Kelley Johnson, instead of distinguishing herself directly, chose to share a story that revealed what it meant to be a nurse. Changing the often heard comment: “I’m just a nurse” to “I am your nurse” resonated with nurses who have also experienced the beauty of how extraordinary the nurse patient relationship is.

The risk Kelley Johnson took was to have the confidence to broaden the definition of what talent could be in a beauty competition. She spoke to what she knew best, and that was being a nurse. Ms. Johnson’s presentation was for many, too understated. She offered a talent that did not command the audience to merely gaze at her. Rather, she asked that the audience lean into her personal story about what she learned from an Alzheimer’s patient.

Her first person account of one particular patient conversation was not theatrical. It was powerful because of its simple, unadorned quality.

Monologues are rarely used in talent competitions unless they are selections from literature. Did Kelley Johnson’s personal story meet the historic standard of pageant entertainment? Contestants traditionally present very “look at me” acts. Would the judges and the audience be able to suspend their expectations and judgments of equating beauty pageant talent with a talent offering that did not look and sound similar to years past?

But what is more amazing than Kelley Johnson’s second place win in the Miss America’s pageant, is that a nurse stepped out of the shadows and was able to capture more coverage than The Denver Post. Ask the cast of The View and their ill-fated criticism of the stethoscope.

Fire fighters, police chases, DEA raids, paramedic’s rushing down the streets in ambulances and Search and Rescue teams finding lost hikers, are often seen on the news and written up in newspapers. Nurses exhibiting their knowledge and expertise? This is very rare. The vast array of where nurses practice and what they anonymously provide is rarely depicted by any media big- hitters. Nurses do not have media, marketing or full time PR firms to jump on any of their stories, showcasing their “rescues and saves.”

Nursing care remains for the most part invisible. It has been rated as the most trusted and respected profession for over a decade. So how has this trust been bestowed on nurses since their presence outside of their work environment is so limited? It’s based on patient experiences.

But the profession is at risk, hoping that reality TV shows will portray nurses in anywhere close to the depth and diversity of what they in reality provide. Because there are so few stories or images of nurses, the public’s image will remain stereotypically distorted.

The sincere, slightly unpolished and singular message of Ms. Kelley’s behind-the-scenes story did more than exhibit an original, new talent genre to The Miss America pageant. Robert McKee states: “Storytelling is the most powerful way to put ideas into the world today.” Kelley Johnson RN personalized and created a vision of nursing that benefits the public and those within the nursing profession.

There is always a story behind the story, and this is the BIG story for the nursing profession.